Two friends chasing down a dream

The trip idea started as a quick 1 night 2 day journey where we were going to play 2 or 3 of the 8 courses.  Going into the trip the confidence level was high as Greg’s moms friend is a woman member at San Francisco GC, the head pro at Mayacama is good friends with the head pro at Martis Camp where Greg’s parents are members and our good friend Neil is a social member at Olympic Club. The plan from the start was to play those 3 courses in two days.

Unfortunately, we arrived at the W Hotel in San Francisco on Monday, July 15th still not knowing where we were playing Tuesday.  Neil, our friend from Olympic Club, had lined up a 7:30 tee time on Wednesday at Olympic Club but Tuesday  was still up in the air. We decided to not worry about Tuesday’s golf location and enjoy a night out in San Francisco.  We had a fabulous dinner at Boulevard  (Greg’s favorite San Francisco restaurant) and capped the evening with several cocktails at the Redwood Room in the Clift Hotel.  Maybe we won’t succeed on our golfing journey but we surely will have fun and experience the best San Francisco has to offer.

Unfortunately, Greg’s moms friend ended up not getting us on San Francisco GC.  This had something to do with her being a woman member at a male dominated club. We didn’t ask questions.  We were still hopeful that we could get on Mayacama Tuesday morning.  Mayacama is closed to members on Tuesday but caddies and staff are allowed to play the course.  Unfortunately, Greg got an email at 10:45PM on Monday night that we wouldn’t be able to play Mayacama due to a staff party that day.  Damn… we had high hopes for the 8 courses in Northern California and starting our first day without getting on any of them was disheartening…  Oh well, we are together, in San Francisco and ready to play…

On Tuesday, we decided that we didn’t want to drive all the way  to Pebble Beach. The next best course not on the top 100 list is Pasatiempo Golf Club in Santa Cruz.  Pasatiempo Golf Club was designed by the famous English Architect Alister MacKenzie. (MacKenzie also designed Cypress Point and Augusta National.)  In fact, Pasatiempo was MacKenzie’s favorite course and he lived there until his death in 1934. Pasatiempo was opened in 1929 with Bobby Jones playing in the first group. Pasatiempo appeared on the Top 100 list  until 2007.  While Pasatiempo doesn’t help us on our quest to play  the top 100; we were both excited to play our first Mackenzie design. 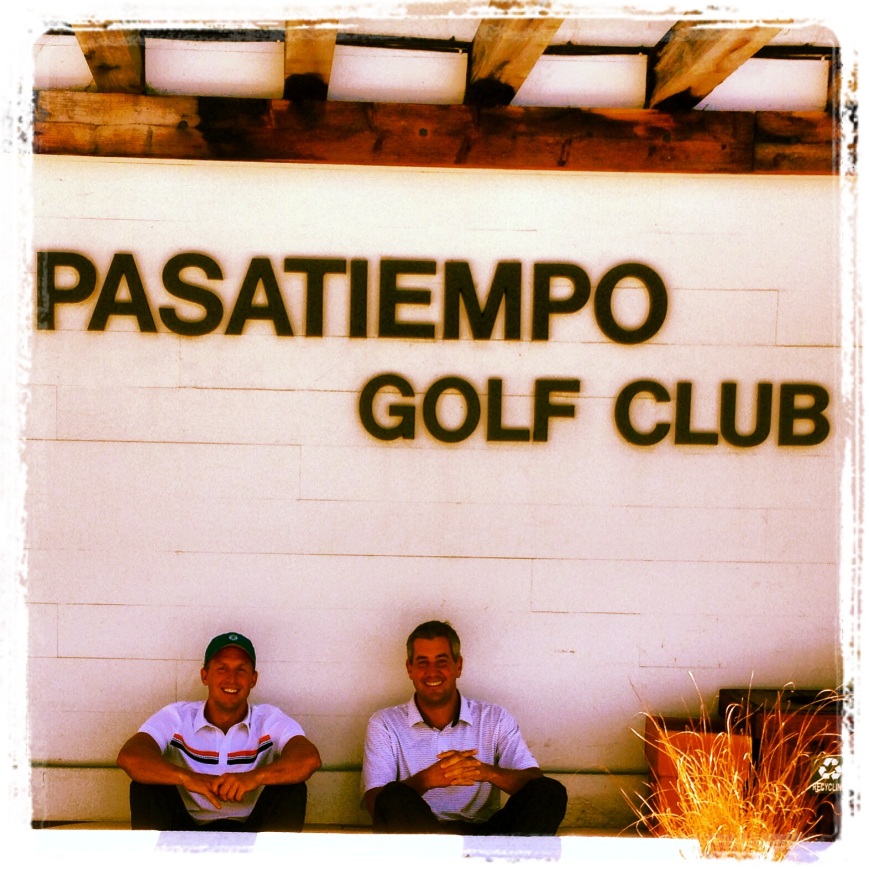 Greg and Ashley at Pasatiempo entrance 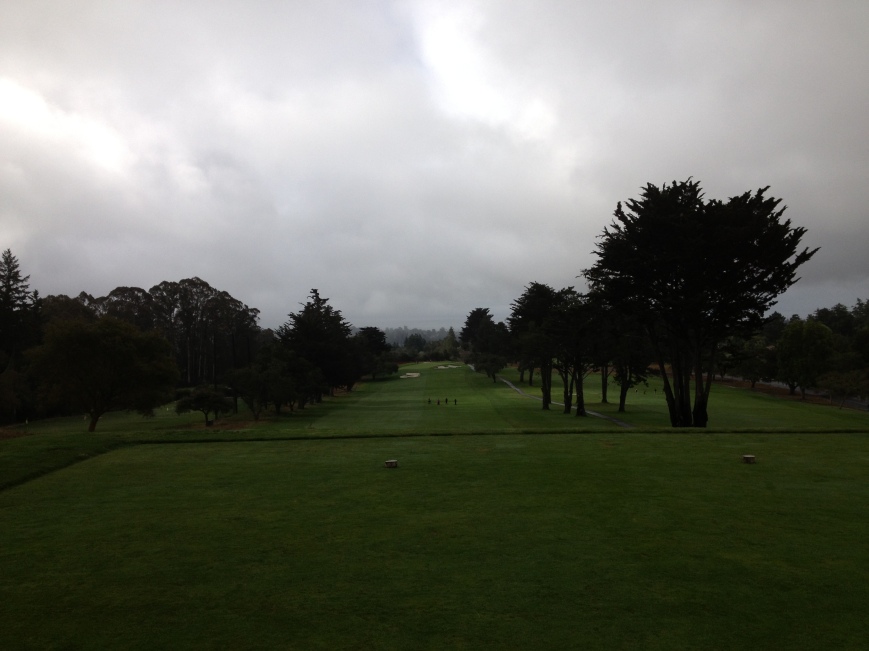 1st Hole from the tips

Pasatiempo is a 6500 par 70 golf course from the tips which we decided to play from.  Greg is a 2 handicap and had to give Ashley 8 shots in the normal $20 Nassau bet. We were paired with a local member who was also named Greg. Greg works the night shift with PG&E and usually plays Pasatiempo 4 or 5 times a week.  He was a 4 handicap who ended up shooting 82.

Pasatiempo isn’t a long course but it is difficult as the 72.4/ 143 rating/ slope would suggest.  The greens are extremely undulated and it is important to leave the ball below the hole and on the right tier.  Additionally, the course was wet as it rained earlier that morning and the skies continued to be heavy all day.  There are some extremely tough holes at Pasatiempo.  Most notably, the 214 yard par 3 number 3, the 440 yard par 4 number 10 and the #1 handicap 16th hole.

Pasatiempo is an excellent course with a unique layout (not many courses end with  a par 3).  The course puts an emphasis on ball position and the short game.  We both loved the course and found It shocking that it wasn’t still rated in the top 100. Overall, Greg shot a 75 (38-37) and Ashley 94 (49-45). Greg won $100 in the Nassau bet.

After the round, we headed back into San Francisco to enjoy another night in the city.  We started our evening at Royal Exchange in the Financial District with our friends Neil and Derek.  After that, the 4 of us headed to Balboa Cafe in the Marina to enjoy dinner and cocktails. We were joined by good friends Matt, Mike, his girlfriend Cameron, her friend Zen and the Rau  brothers.

While we didn’t play a top 100 course on our first day in San Francisco; we both viewed it as a success.  Playing Pasatiempo and ending the day with good friends will be a tough day to beat! 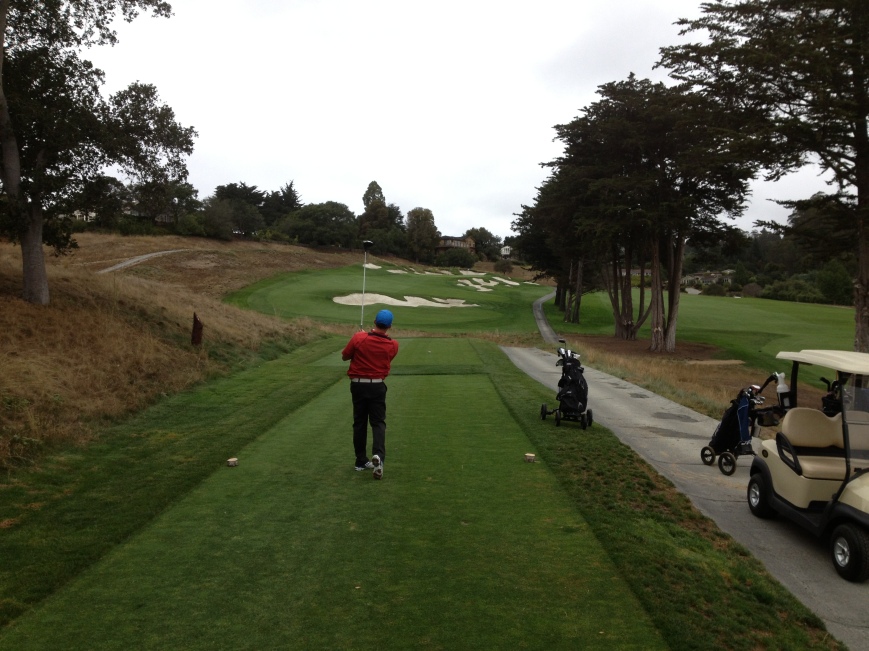 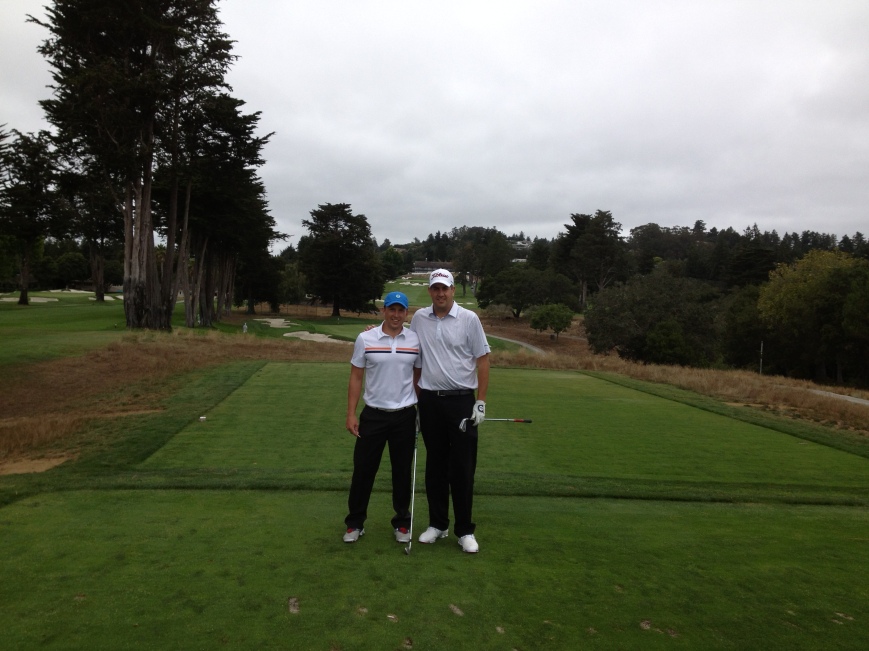 Ashley and Greg on the 8th hole. 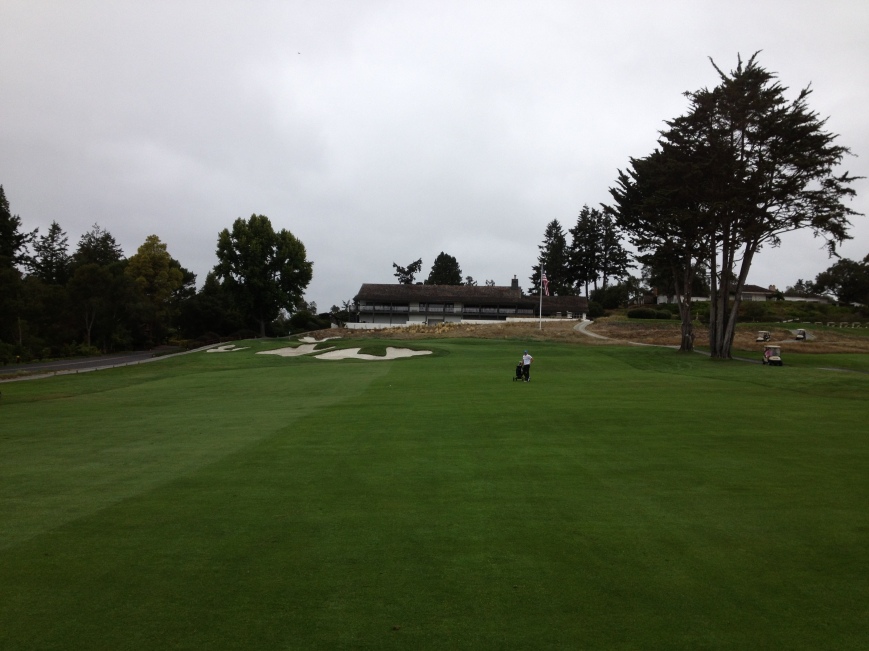 Greg on the 9th fairway with the clubhouse in the background. 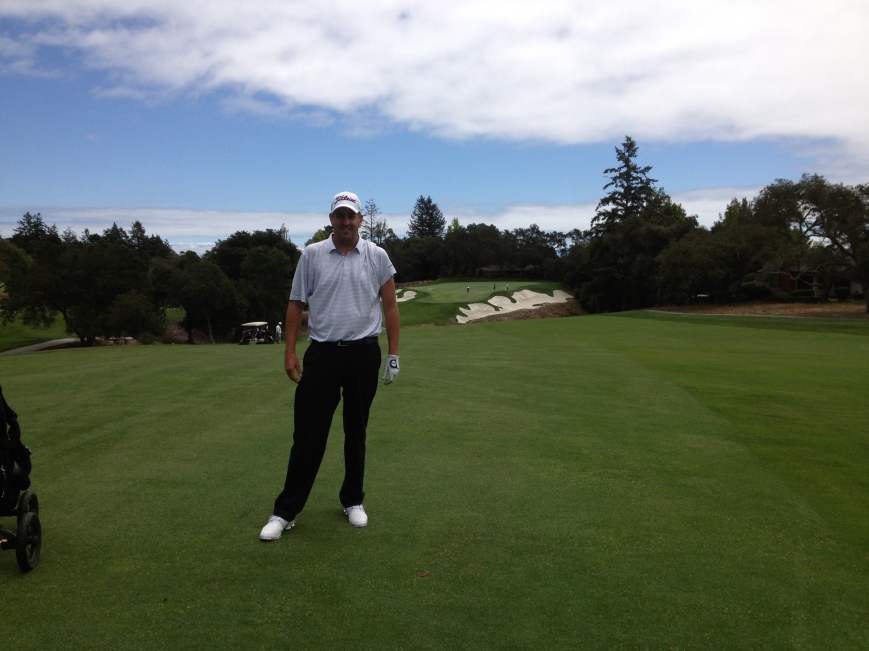 Greg  in the 16th fairway.  Number 1 handicap which he birdied. 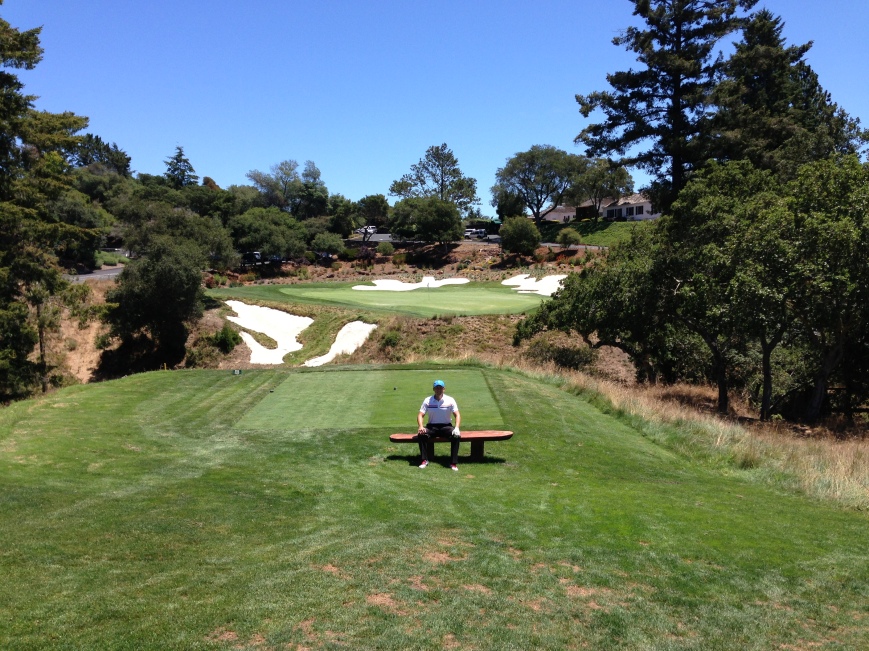